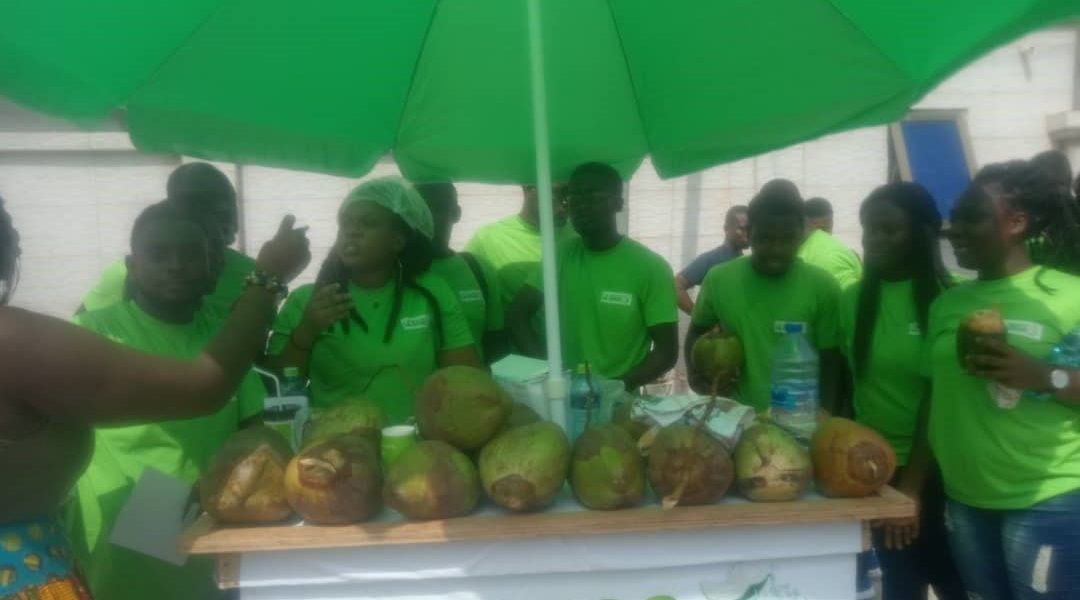 A group of students of Laweh Open University has taken the sale of coconut beyond the boundaries of the ordinary. Members of the group, numbering 12, have practicalise some of the basic principles of entrepreneurship and marketing into the art of selling coconut, thus giving meaning to a tagline of the University: useful and applied learning.

The brand name for their novelty project is called ‘La mesa,’ which according to Nicholas Leigh, a member of the group, means ‘The Table’.  It goes without saying that ‘The Table’ also signifies food being served, and this context the branded coconut.

The brand colour for La mesa is green and all members wear green-branded La mesa T-shirts when they are on duty.  Members say the green was chosen because it matches the outer colour of the coconut. A unique feature of La mesa coconut is that the coconut, unlike any other, is chilled.

“La mesa coconut is chilled in order to mitigate the hot weather, especially around this time of the year,” Nicholas explained.

As part of their marketing tactics, members of La mesa provide both consumers and prospects with   flyers, providing information on the benefits of their offer, why their services are unique and convincing them to come over again next time.

Nicholas added, “We also give them complimentary card for purposes of contacting us for orders and if somebody may want us to come over and serve them La mesa coconut during occasions such as parties and weddings.”

President of Laweh Open University, Prof. Goski Alabi, was full of praise for the group, all Level 300 students, and their Entrepreneurship lecturer, Mr Michael Kubi.  Indeed, the ‘La mesa’ was a response to a class project work.

Prof. Goski disclosed that certificates for Laweh Entrepreneurs of 2019 would be presented to groups that excel in their project work.

She announced that the University would soon be organising a media launch of the Laweh Entrepreneurship Challenge and the public would be present.