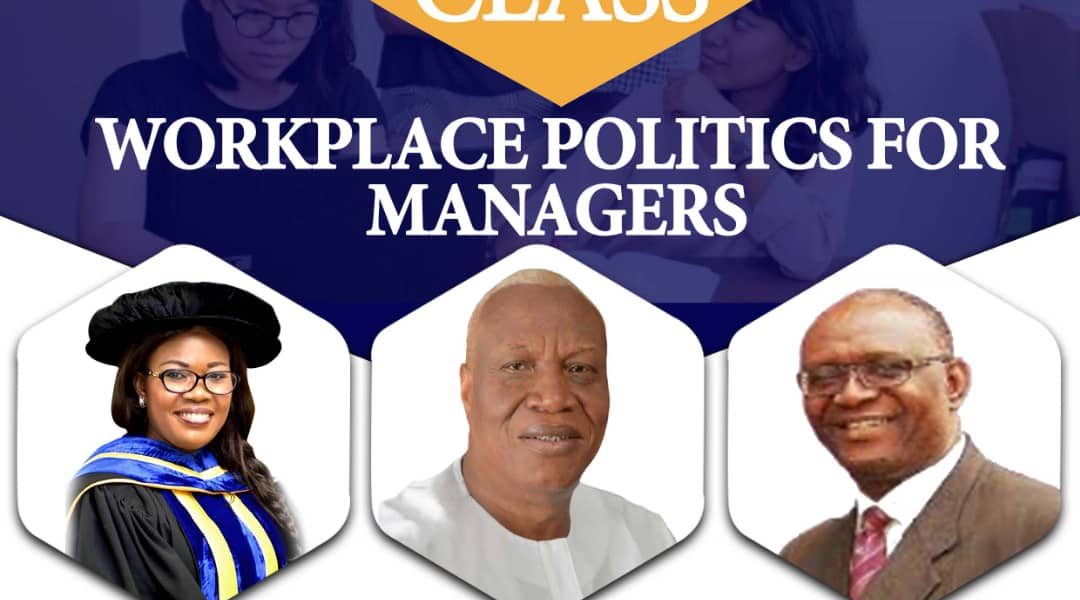 Prof. Joshua Alabi and Prof. Mrs Goski Alabi have treated participants of a Master Class on ‘Office Politics for Managers’ to eye-opening thoughts and strategies of how to take due advantage of it for one’s benefits.

The two-day Master Class, held on June 23-24, was organised by Laweh Open University College and is the first in a series of Master Classes planned by the University.

Prof. Mrs. Goski Alabi, President of Laweh Open University College, set the ball rolling with a comprehensive presentation on the concepts and theories of Office Politics, demonstrating with copious examples, thereby turning an otherwise complicated subject into a fertile one.

She explained Office Politics as the use of power and social networking within an organisation to achieve changes that benefit the organisation or individuals within it.

She stressed that people join organisations and later leave, however, Office Politics never ceases, but may undergo changes. Thus, one has to brace themselves for, and make the best use of it.

Mrs. Alabi, a professor of Quality Management and Leadership, identified the various sources from which different personalities derive power in an organisation. And these include position, resources, expertise, information, association, social capital or relationships, promises, trust and emotions.

She emphasised that a method by which managers could use to neutralise the negative effects of Office Politics is to be a role model to employees by setting the ground rules and abiding by them.

For strategies to leverage on Office Politics, Prof. Mrs. Alabi had a number of solutions. These include the need for one to map and appreciate the power dynamics; the use of intelligence system to understand the informal networks; and build connections and collaborations.

The rest are to develop your ” People Skills”; make the most of one’s network; be brave but do not be naive; and neutralise negative politics by understanding the different personalities involved.

Prof. Joshua Alabi, former Vice Chancellor of University of Professional Studies, Accra (UPSA), shared his practical experiences from academia and industry, when he spoke on ‘Dealing with Different Office Personalities and Politics’.

Prof. Alabi, one of Ghana’s finest politicians and an accomplished and award winning Organisational Leader, noted that there is a clear difference between a colleague and a friend, and the relationship with each of them should not be confused with the other at the workplace.

He advised that any time your immediate boss gives a directive or instruction which is at variance with the organisation’s policy or procedures, respectfully request that it should be put into writing or before you carry it out, write to him/her indicating that the directive is being carried based upon the prior discussion between the two of you. He said such documentation might absolve you from blame in the future.

Prof. Alabi advised that, sometimes it may be expedient for a boss to call a subordinate who is known to be very knowledgeable on some subject matter, but chooses to be eloquently silent when the issue comes up for discussion at meetings. Through such a tactical approach, the leader may get the best of answers to the issue or may get to know the underlying cause for the subordinate’s silence.

The Master Class also featured Prof. Emeritus Olugbemiro Jegede, the Immediate past Secretary-General of the Association of African Universities and Member of the Advisory Board of the United Nations University Institute for Natural Resources in Africa. Prof. Emeritus Jegede spoke on ‘Handling Gossips, Rumours and Conflicts at the Workplace.’

In her closing remarks, Prof. Mrs. Alabi congratulated the participants on their active participation by their questions and suggestions. She announced that the Master Class would be organised on monthly basis, and participants and prospectives should be looking forward to one in July.

Participants of the Master Class expressed their gratefulness to Laweh University for organising such an educative forum. They will receive electronic copies of Certificate of Participation.

Editor’s Note: Watch out for a story on Prof. Emeritus Olugbemiro Jegede’s presentation in the coming days.