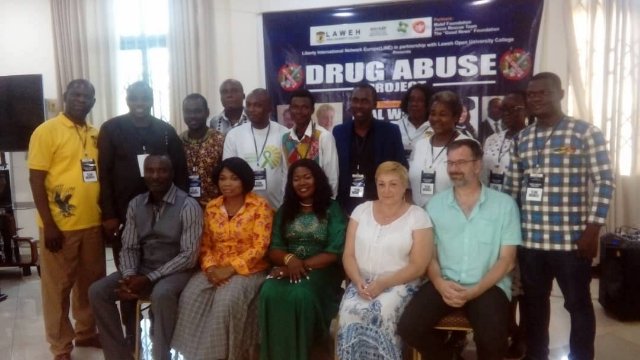 The 11-member group is christened Coalition of NGOs on Drug Abuse (CONDA) and hosted by its partner, the Laweh Open University College.

Others are Fountain of Hope and Love, MAHLEF Foundation, Care for the Nations, Ghana Police Hospital and Laweh Open University College.

The inauguration of CONDA was one of the highlights of a three-day Drug Abuse Project, which included the launching of the Elijah Project; training of mentors for the Elijah Project, a day’s awareness raising and mentorship at Tema Naval Base and a visit to some ghettos at Tema Newtown.

The resource persons were Mr JimVansice and Mrs Dawn Vancise of Recovered 4 Life-UK and Rev Dr Rolland Dankwa and Mrs Beatrice Dankwa of Liberty International Network Europe (LINE). In attendance were masters, teachers, students and pupils of both senior high and junior high schools in Tema and Nungua.

Inaugurating the Coalition, Prof. Goski Alabi, President of Laweh Open University College, observed that Drug Abuse and Addiction is a leadership issue because its victims are largely those who cannot find meaning in life and erroneously think that by resorting to dugs they could find that solace that has eluded them for so long. Very often leadership becomes potential prey to these victims by way of attacks of all kinds.

Prof. Alabi said experienced has shown that victims of Drug Abuse and Addiction require early attention and support, but unfortunately there are no support institutions. She stressed that besides drug addition, the youth become addicted to other vices, including pornography and gambling.

“The challenge and danger have to do with the fact that some children under 10 years in our primary schools engaged in drug abuse. Hard substances are being sold on the streets, and the victims can be found in our basic and secondary schools as well as tertiary,” she observed with a lot of worry.

College, in accordance with its Corporate Social Responsibility, decided to team up with like-minded institutions of the Coalition to engage in activities, including heightening of awareness of the adverse consequences of drug abuse and addiction among the youth, thereby protecting them from becoming victims and rescuing and helping restore victims to normal life.

Prof. Goski was full of praise for Liberty International Network Europe (LINE) and Recovered 4 Life-UK for the their work in Europe and America, and their pivotal role that made the three-day Drug Abuse Project workshop hugely successful. She hoped that ideas and tools learned by participants would be replicated in their respective fields of endeavour.